The Making of the Scroggs Frog 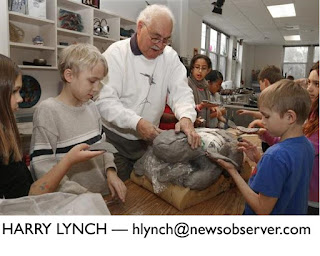 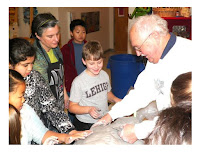 Fourth-graders at Scroggs Elementary School recently got a chance to meet and work with local artists
.

Cornette shared the artists’ work with her students before they visited, and they prepared questions to ask the artists. 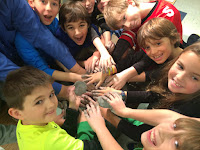 later in life.Forrest Greenslade, a retired molecular biologist who lives in Fearrington Village, now paints, sculpts and writes. He brought his personal favorite painting to share with the class Tuesday afternoon.


“The reason this is my favorite painting is because the idea for it started when I was exactly your age,” he told the class as he displayed his painting of an ivory-billed woodpecker. “This painting really represents my entire life.”

He told of being inspired by paintings of birds as a young member of Junior Audubon Club. These images inspired him both to study science and become a biologist and to paint animals

But the students didn’t only learn about Greenslade’s work — they also rolled up their sleeves and created something of their own.

Greenslade taught the students how to collaborate with each other to create small clay slabs that would eventually fit together to form a giant frog, Scroggs’ mascot.

“Find places and just poke it in right there,” Greenslade coached as the students lined up with slabs of clay 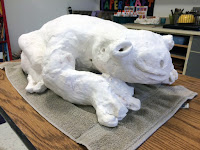 flattened with their hands and rolling pins.

Students patted down clay around a center of cellulose beads, or packing peanuts. Greenslade said he hoped the beads would burn up when the frog was fired in the kiln, leaving a hollow frog.

However, there was also the possibility that the frog could burn up in the kiln.

“We’re going to take a risk and try something new together,” Greenslade told the class. 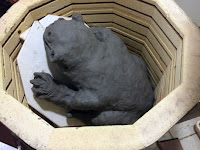 Student Sonia Levin-Metcalfe said she liked studying and meeting local artists because “we get to learn different kinds of art and different types of it.”

She also said she liked the frog project because “it’s a lot of teamwork and it’s a big experiment. So you don’t know if it’s going to make it through the kiln and actually become a piece of art. But it’s fun to try.”

As the students patted down their clay, the frog began to take shape. Then it was time for smaller embellishments, and students set to work making frog toes and eyes.

“I like how it all comes together,” said student Griffin Nargi. “The art of it is just to put in the perfect details.” 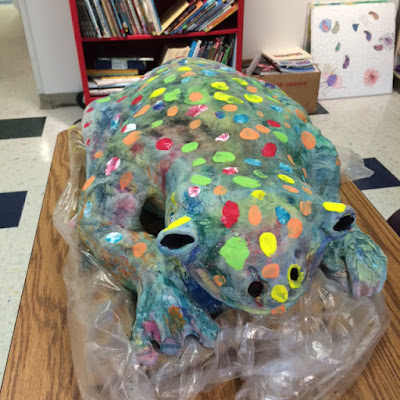 Posted by Forrest C. Greenslade, PhD at 6:36 AM