Local writer John Keith will read from his latest book, "Canebrake Beach" at McIntyre's Bookstore in Fearrington Village on Friday, August 24 at 2:00 p.m.

"Canebrake Beach" is a novella and short story collection that explores friendships, relationships, and conflicts of white and black Southerners at various intervals over a span of seventy years.  Four tenant families, some black and some white, lived on the farm owned by the author's family when he was a child.  Although no one who grew up on the farm was active in the civil rights movement except for him, in "Canebrake Beach" he imagines what might have happened to members of similar black and white families as they progressed from the Jim Crow era and beyond. 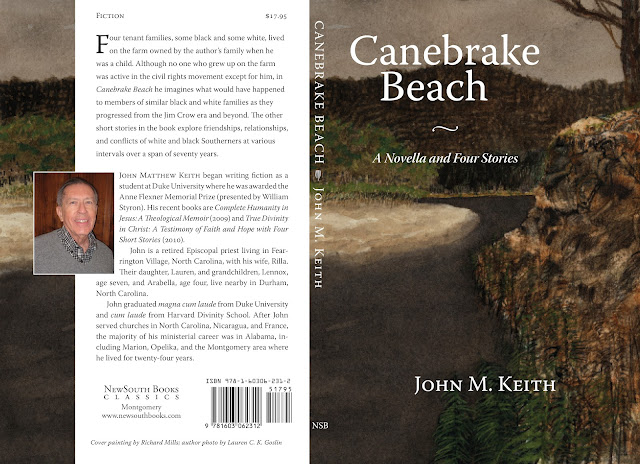 
John Matthew Keith is a retired Episcopal minister who has lived in Fearrington Village, North Carolina with his wife Rilla for over five years.  He began writing fiction as a student at Duke University where he was awarded the Anne Flexner Memorial Prize (presented by William Styron).  Anne Tyler was a student in the creative writing class taught by Dr. William Blackburn when John was the teaching assistant.  Although his secular stories, like "Canebrake Beach", have been published in magazines and periodicals over the years, his most recently published books focused on spirituality: "Complete Humanity in Jesus: A Theological Memoir" (2009) and "True Divinity in Christ: A Testimony of Faith and Hope with Four Short Stories" (2010).

"Canebrake Beach" was published simultaneously as an e-book and in paper.
Posted by Forrest C. Greenslade, PhD at 4:21 AM