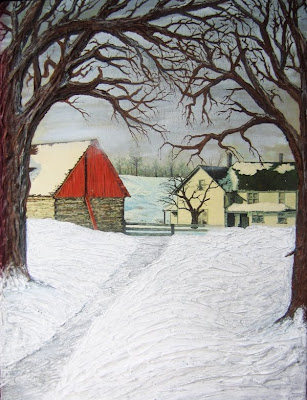 I decided to attempt to frame Uncle Nick's precise images within one of my stylized and rustic relief paintings, using modeling paste and tarnished metals. I started by repairing a gash in the background sky. Nick had started to sketch in a tree to the left of the barn, so I developed my component of the painting there. On the right side of the farm house, the canvas had been damaged. I covered that space with an additional tree. In the for ground, Nick had penciled in some details. I didn't attempt to develop them. Rather, I just piled up snow and ice to further strand the little farm in winter's grasp -- focusing the eye on my glimpse into Uncle Nick's world.
Posted by Forrest C. Greenslade, PhD at 11:16 AM 1 comment: