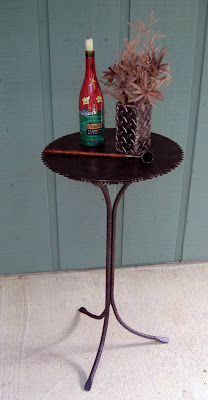 At the next 3rd Friday Art Walk in Siler City on May 21st, high school senior John Norwood will display his Senior Project metal table at the Central Carolina Community College Gallery. Pottery and Sculpture Program Director Phillip Ashe says, “This is a good example of how our program in metal and ceramic sculpture provides employment and life enrichment skills to our area’s communities.” “One of the students in our program, Forrest Greenslade, is active in passing his knowledge and skills on to younger students as a mentor,” he adds. “We are delighted to have his current student’s work on display in our May exhibit.”

Norwood, like every graduating senior in Chatham County was confronted by a requirement to complete a rather daunting project. He had to produce a product, write a research paper, assemble a portfolio, and give a brief talk about his work. Norwood has a strong desire to work with metal, and got a good start designing and constructing a forge from a garbage can, some scrap metal and an electric hair dryer. His dad supported and guided him with this stage of his project.

Then, Chatham County Together, a mentoring organization intimately involved with the Senior Project program, teamed John up with artist Forrest Greenslade. John thought that he might make some sort of weapon using his forge. He has an interest in the military. In fact, right after graduation in June, he will be off to Oklahoma for Army basic training. For their first step, Forrest took John to the studio of Tamera Mulanix, a renowned Chatham metal sculptor. Mulanix and Greenslade are both members of the Chatham Artists guild, the organization that produces the Chatham Studio tour each December. Tamera showed John the variety of artworks that she creates in her well equipped studio. Inspiration struck when John saw some of her elegant metal tables. He decided to design and produce a table to leave for his parents when he goes on to his military career. Tamera let John scavenge in her scrap pile, where he selected a metal round disc and an old saw blade.

In Forrest’s studio, John polished up his welding skills that he first learned at Northwood. Then he welded the metal disc and saw blade together to for the table top. Back in his yard, he then used his forge to bend three pieces of reclaimed rebar into the table’s legs. The final assembly was done in the Greenslade studio. Finally, back in the Mulanix studio, the John learned to apply Tamera signature finish to the Table.

“I am really impressed with John’s product,” notes Greenslade. “It has the esthetic of the late 19th century industrial period – masculine and functional.” I really like the way it came out, stresses Norwood – I’m proud of it. Mulanix says, “It was a pleasure to work with John. I hope he can continue on in his artistic endeavors. He is talented.”

While doing research for his paper, Norwood learned that blacksmithing, was once the major approach for industrial production, but as metal working techniques such as welding and casting developed, the smithy became relegated to produce artwork and decorative items. “How ironic that John, whose first thought was to use his forge to smith a weapon, decided to create such an elegant and decorative table,” Greenslade smiles.
Posted by Forrest C. Greenslade, PhD at 10:02 AM 2 comments: