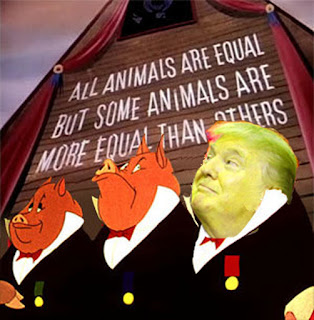 Well, I thought that my story was complete.

The Wimpy Wannabe Pig did certify that the Real Old Donkey was the President, and he took office.

The Great Orange Pig left the White Farmhouse and flew down to Mara Lardo, his own pig pen in Florida.

Most of his swine followers still believe that the Real Old Donkey had stolen the election.

I keep thinking that this is the end of my story.

But I guess it ain't really over until Fat Pig squeals.

Posted by Forrest C. Greenslade, PhD at 4:00 AM No comments: