Forrest Greenslade never intended to
become an artist when he retired. “I
was going to write books, give lectures,
and do some management consulting,” said
Greenslade, who is #25 on the tour and like
Spina, lives in Fearrington at 149 Tinderwood.
“Then, I had a heart attack and that life I had
planned was not right for me anymore.”
He moped. In an attempt to reverse his
mood his wife Carol-Ann took her husband
out on the Chatham Studio Tour one morning.
“I saw just how satisfying it must be for the
artists,” Greenslade said.
The two came back to their home for lunch
where Carol-Ann turned on the TV to watch
one of the design shows she loves. “It was
Martha Stewart’s show, and she was making
a garden pot out of concrete,” Greenslade said.
He put down his sandwich, went out to his potting
shed and made a face out of concrete. “I
was hooked.” He sent a photo of the face to a
friend he had made in the local Toastmasters,
and she told Greenslade that if he made more,
she would sell them. “I was a practicing sculptor
in one day.”
This was 14 years ago. He began studying
art and honing his skills and eventually was
accepted into the Chatham Artists Guild.
“Because the Studio Tour was my inspiration
for starting, I really wanted to participate in
it,” Greenslade said.
The encouragement and guidance he
received from other Chatham artists really
helped Greenslade, and he credits Tamera
Cooke with much of his progress. His daughter,
Kathryn Armstrong, a longtime artist,
got Greenslade started on painting.
“All of my work is pretty much nature
inspired,” Greenslade said. A series of 18 paintings
that he recently finished was inspired
by the pollinator garden that is down at the
Chatham Mills.

When the economy tanked, few escaped unscathed. Fearrington
residents Carol-Ann and Forrest Greenslade were not among
those lucky few.
“My 401K got kind of burned up, and my wife’s real estate
business slowed down,” Greenslade said. “We were starting to
wonder if our money would run out before we die.”
The couple started thinking about ways to supplement their
income including renting out the small apartment attached
to their home. It was where Greenslade wrote and created his
artwork.
“But I had reservations about full-time tenants. We had
owned a building once, and it was the worst experience of my
life,” Greenslade said.
Then one morning in late 2013, the Greenslades saw a news
show about small businesses. The focus of the show was the
shared economy, and it talked about some young men who,
though they were college graduates, could not pay their living
expenses. They got air mattresses and put them in their spare
room to rent out to tourists. The men went on to found the
Airbnb website that is now in use world-wide. “I started reading
Forbes and other business magazines about this, and the more
I read, the more I thought this was a good fit,” Greenslade said.
The Greenslades checked with their neighbors to make
sure that they would not be uncomfortable with them turning
his studio into a place where visitors could stay. Then
they got to work fixing up the space. The walls are covered
with Greenslade’s paintings and a bookshelf at the top of the
entry stairs is filled with his sculptures and some of his artist
daughter’s too. There is a hand-painted dining room table and
chairs next to the small but fully-functioning kitchen, a writing
desk, and sitting chairs for lounging. A set of cupboards
holds towels as well as books for visitors to use during their
visit. Brochures about local attractions are provided, and
Greenslade tells them about the vibrant, local art scene
and the Fearrington nature trails.
“We had our first guest in May of 2014,”
Greenslade said. Since then, the Artist Garret
has been booked about once a month, with
guests typically staying for a few days. Usually
they have come to town for family-related
events, such as a graduation. One couple came
to stay to be near a family member who was
in the last days of his life. To greet each new
guest, the Greenslades stock the studio with a
chilled bottle of Prosecco, cheese and biscuits,
and a bouquet of flowers from their sculpturefilled
garden.
“What has been surprising is how wonderful
people have been,” Greenslade said. “I
kind of thought it would be something I would
have to live through for financial reasons but
it has turned out to be a joy. It also gives me
another opportunity to show my work to a
broader geographical audience.”
Greenslade said that the Airbnb website
takes care of all the financial aspects of this
venture. “They take three percent from us and
six percent from the visitor for use of their
platform. The day after the guest arrives, there
is a wire transfer into our bank account. It
works perfectly for us,” Greenslade said. “We
have now met a lot of people around here who
have used Airbnb when they travel.”
This kind of shared economy is very democratizing
said Greenslade. “You don’t have to be
a Paris Hilton to be in the hospitality business
or have a music contract to publish your CD.
Technology has made a whole world accessible
to the average person if they will just learn
how to use it,” Greenslade said

Note -- The Artists Garret can be viewed on AirBNB

Posted by Forrest C. Greenslade, PhD at 11:34 AM No comments:

Sex in the Afternoon: The Nasty Little Secrets of Pollinators

Visit our Organic Forrestry studio (# 25) during the first two weekends in December during the Chatham Studio Tour. I will feature my new series of mixed media paintings, inspired by the Pollinator Garden at Chatham Mill in Pittsboro, NC. This is my Summer's crop of paintings. We have a large inventory of paintings, and you can stroll through our Forrest Dweller sculpture garden. 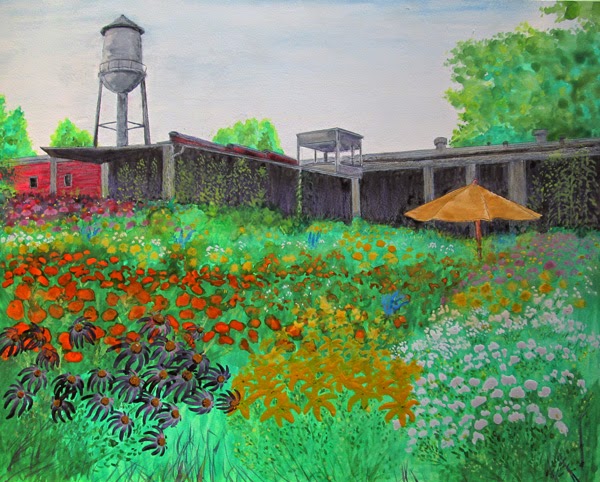 2014 is our 22nd Studio Tour. The Chatham Tour is one of the first in North Carolina, and a model for others which have followed. Click HERE for a list of participating artists, and a Tour Map.
I hope the see you,
Forrest 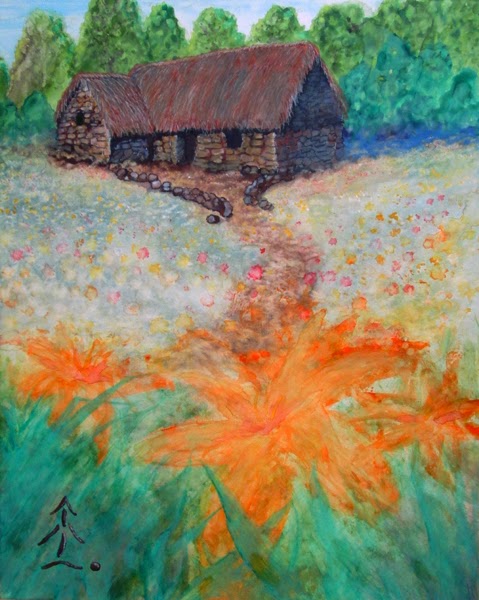 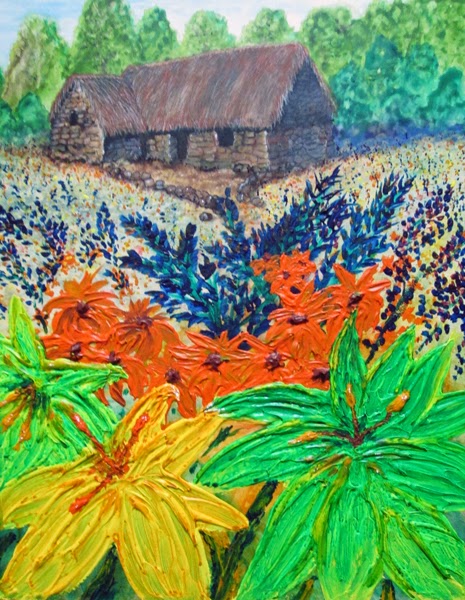 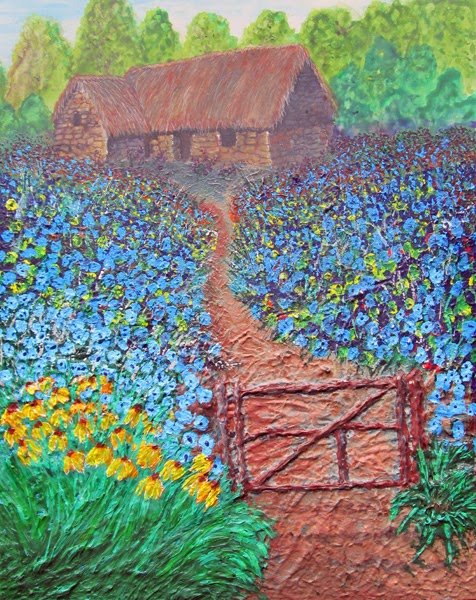